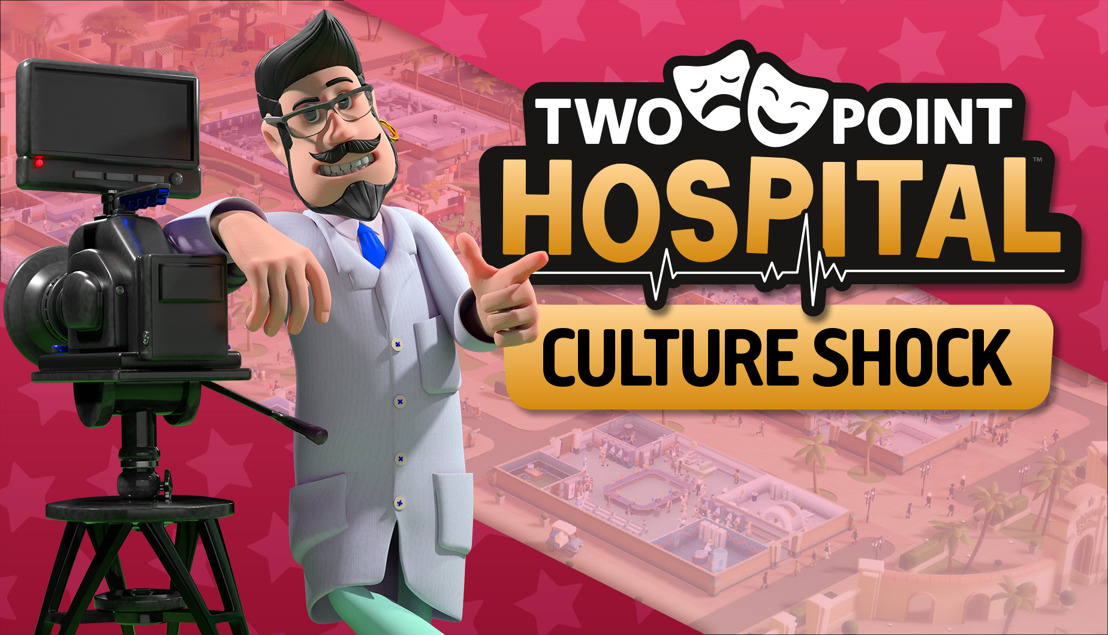 In Two Point Hospital: Culture Shock players will experience a world of lavish lifestyles, movie stars, festivals and of course…a party hospital. Before players can live out their wildest dreams, they are teaming up with the County’s very own celebs, to bring the television scene, music industry and the very arts themselves back to life. Culture Shock is still a hospital management simulation game where players will have to run hospitals, deal with troublesome staff and cure all sorts of new unusual illnesses like, Stunt Trouble, Private Parts, Concertoes and Writer’s Block.

In Two Point Hospital: Culture Shock players will start their new journey in the glitz and glamour of Plywood Studios, where launching a hit medical drama show could save the County’s artistic crisis or not… Head to Mudbury and experience festival life for yourself, while serving burgers from questionable vans. Lastly, celebrating the success of previous projects, players can finally live out their Hollywood dreams at Fitzpocket Academy, where art, glamour and hospitals (?!) come together. Culture Shock has the most (36!) new illnesses featured in any Two Point Hospital DLC yet, including twelve visual illnesses, but also three fabulous locations, three new fully animated cure machines, 34 new items to pimp up your hospitals and finally, make sure to turn up the sound, because there is a new DJ in town.

For anyone who’s fed up with their staff looking like actual professionals, make sure to check out the new Fancy Dress Item Pack next week, where tangy outfits, outrageous hats and diagnosed wizards are the new normal. The Fancy Dress Item Pack includes 23 outfits, headwear and items, and is available from the 20 October 2020 on Steam, where you can also claim a free Zombie costume.

Two Point Studios Ltd. is a British game developer, based in Farnham, Surrey (UK) and was founded in 2016. Two Point Studios’ small, but dedicated and passionate team have worked on some of the most recognisable brands in gaming, including Fable and Black and White. Drawing on that experience, Two Point Studios released a brand-new IP in the sim genre called Two Point Hospital, which launched for PC in August 2018. For more information about Two Point Studios visit www.twopointstudios.com.