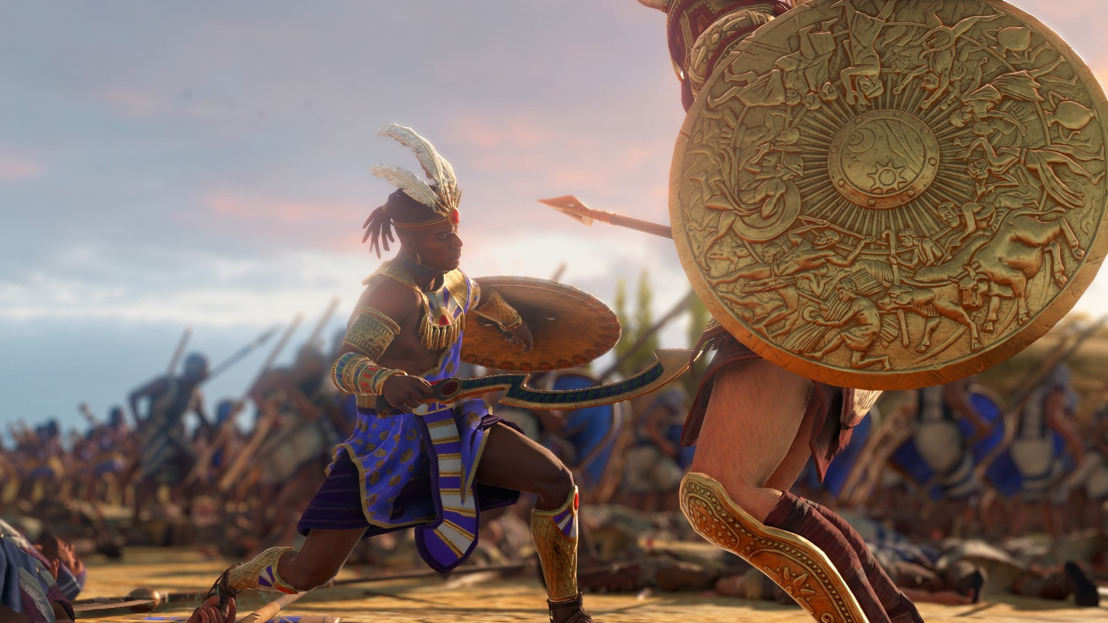 Mighty Rhesus is a driven and relentless commander who hails from the deep-forested valleys of Thrace, home to countless warrior-tribes and fearsome primordial gods. His armies rely on strong early engagements, decisive charges, and his units fight predominantly without shields; however, they have good chargers, good armour-piercing and excellent morale.

Warrior-king, Memnon, is a distant cousin of princes Paris & Hector and leads the mighty multicultural armies of Aethiopia, a vassal state of Pharaonic Egypt. He is known for a battle prowess akin to that of courageous Achilles, and his roster consists of quick, lightly armored warriors that have the tools to stay engaged in battle, while each culture within his roster provides powerful strategic advantages.

With more than 37.8 million copies sold, Total Waris one of the most established and critically acclaimed series in gaming. A drive for historical authenticity and superb gaming quality has helped establish the franchise as one of the most successful PC games of all time. Alongside the core historical-based games, the Total War series has expanded to inluce free-to-play mobile (Total War Battles™: KINGDOM), fantasy epics (Total War™: WARHAMMER®), and historical snapshots (Total War Saga™: THRONES OF BRITANNIA). www.totalwar.com

The Creative Assembly Ltd. is one of Europe's leading games development studios, founded in 1987 and located in West Sussex, UK and in Sofia, Bulgaria. With a heritage of award-winning AAA titles, including the multi-million selling Total War™ series, Creative Assembly continues to build an impressive portfolio of games and world-renowned partnerships; working with Games Workshop on Total War™: WARHAMMER®, Twentieth Century Fox on Alien: Isolation, plus 343 Industries and Microsoft on Halo Wars 2. Creative Assembly has, with their exceptionally talented team of over 700, amassed a wealth of awards, including multiple Best Place to Work Awards and recent accolades from BAFTA, Music+Sound and Develop’s Industry Excellence awards. www.creative-assembly.com